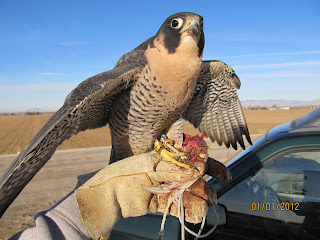 Here is a New Years Day photo of Pokie the Anatum Tiercel(male) Peregrine Falcon. He had just returned to me after chasing some pigeons around a dairy farm. Molted into adult plummage nicely, didn't he?
Posted by Eric Tabb at 10:56 AM No comments: 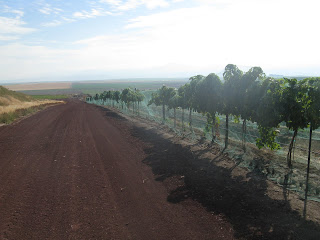 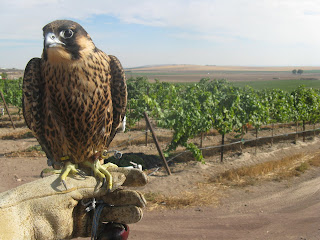 Spent some time on this warm October afternoon, driving around a large vineyard
in southern Canyon county. I was curious to see if there was any depredation of the ripe grapes
in progress. My young male (tiercel)Peregrine Falcon, "Pokie" had been flying strong and I was interested in seeing how he would fly over grape vines.
We concentrated on a picturesque location with a perfect growing situation. Framed by a lava ridge on it's north boundary, the high point of ground, the orderly vines spread south towards the canyon of the Snake River.
The very warm, dry day, typical of the last 6 weeks, seemed like the makings of perfect wine grapes, which still hung in profusion from the well tended vines. No frost had occurred yet, maybe not for a couple of weeks yet.
I watched a flock of black-birds circle and swoop over the vines like a flock of ducks looking to land in corn stubble. Most of the vines were un-protected from birds. A few selected rows were draped with bird netting. I could only surmise that these were varieties of special standing, warranting extra protection from loss. Throughout the rest of the property lay piles of grapes at different stages of maturity, just spoiling in the sun, covered with bees. I really know nothing about viticulture so I could only guess as to what bunches were left on the vines as opposed to those piled at the ends of the rows.
As a horticulturist , I know of the value of thinning to help produce superior fruits, to concentrate quality on those left longer on the plant. Perhaps some loss to birds is considered a form of thinning, at least in the varieties of lessor value or greater abundance.
The falcon ran that flock of black-birds right out of there after surveying the expanse from the car top, parked up on a prominent outcrop. I kept hoping some farm manager would come up to see what I was up too. No one ever does. The Hispanic workers don't even seem to notice me. I would like to talk to someone about what they are doing here, to learn more about whether falconry can offer a real service in crop protection, or if that protection is even needed.
Posted by Eric Tabb at 12:23 PM No comments:

This is my desert, tomorrow. 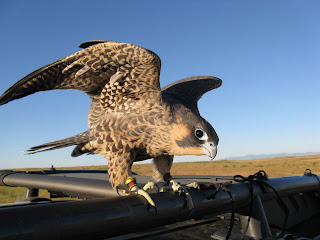 Pokie stretching (actually called warbling in old falconry parlance) from the top of my Nisson Xterra out in the Morley Nelson SRBPNA. Yesterday, he circled straight up a couple hundred feet and finally sailed back to the car.
Today, I did not let him fly. The wind was picking up and there were a bunch of bored ravens downwind that would have loved to have this little guy to work over. It won't be long before he is putting those corvids in their place, but not this morning. I have had a few bad experiences with young Prairie Falcons and Ravens at this stage.
Posted by Eric Tabb at 7:58 AM No comments: 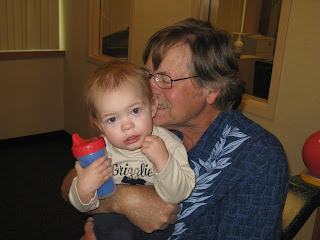 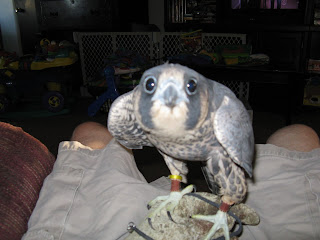 Tough guy, Pokie being a playful imprint. He jumped up and footed the camera a second after this shot was snapped. He isn't being being mean, but boy can he play bite. My nose is all scarred up.
Next is me and rambuncuous grandson Daniel. Man, can this little guy wear me out. He will scratch my nose too with his sharp little fingernails. Or more likely grab my glasses off and slime them.
Kids! They keep you young.
. 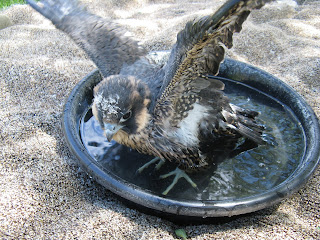 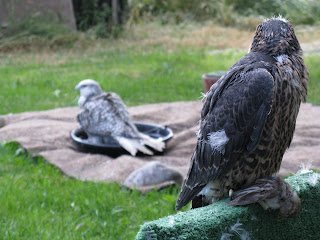 Pokie, the tiercel Peregrine watches Skula the Gyrfalcon bath with great interest. Enough to interupt eating his morning sparrow breakfast.
When Skula was done, Pokie was in that pan in a flash and had a ball. I think Peregrines were called Duck Hawks because they love the water as much as a duck.
While Skula jumps out the minute he feels like he is being watched, Pokie had to be removed from it to dry off in the sun. Just like any kid.
Since this is an age that young Peregrines are still staying up on their nest ledge, makes you wonder if bathing interest is one of the forces that makes them fly for the first time. Urban Peregrine watchers might put bath pans on nearby rooftops so that the young branchers can get some relief.
Posted by Eric Tabb at 9:54 AM 2 comments:

Newest member of the family

It is hard to imagine this fuzzy baby peregrine being scarry to anything (other than this wad of tissue). Just home with me, from his breeder's hands 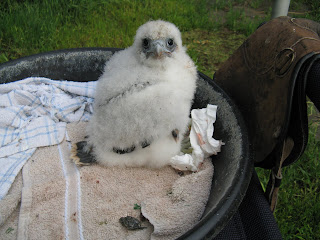 , Pokie, a tiercel, is growing rapidly. His mother is an anatum peregrine of Canadian origins. His father is from California stock. Both, results of the re-introduction efforts started 30 years ago, no longer needed today for wild release.
I can't wait to start taking the little guy out for his first flights. While he is still so young I am taking him to work and everywhere so as to make him as tame as possible.
It is still too early to tell if he will be a human imprint. I think he was left with his parents a few days too long(for imprinting to me). He still hisses at the approach of my hand. He can probably be paired with another peregrine in a couple of years, if I should want to attempt falcon breeding.
This morning I sat with him on Main street in Boise, out front of the Owyhee Plaza, waiting for my wife. Pokie was able to watch the Boise peregrines fly in and out of their nest box with great interest. Little did he know(at least in a way I could recognize) there were four baby peregrines like him up there, waiting for their day to fly. He may even end up interacting with one of them later this summer in their flights around the Treasure Valley.
Posted by Eric Tabb at 4:28 PM No comments: 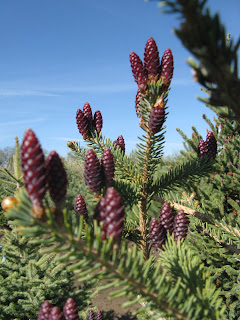 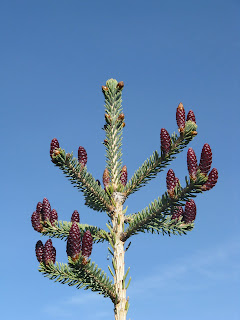 Little jewel surprises at Cloverdale Nursery this morning. Black Hills spruce cones.
Posted by Eric Tabb at 7:31 AM No comments: